Last post by Steve Willson - Yesterday at 09:48:30 AM
I can attest to Oca being very tasty.  Robert was kind enough to send me some tubers earlier this year. I had them growing both in tubs and in the ground.  The ones in the ground, in somewhat poorer soil, produced larger tubers than those in the tubs.  But the soil in the tubs, supplemented with alpaca manure last Fall, was probably richer than the Oca preferred for tuber production as they did produce very lush above-ground growth.  (My wife has alpaca and their poops ("pellets") which are low in nitrogen can be applied directly to the soil without prior composting.)

The Oca, when roasted, have a nutty, slightly citrussy taste and are quite wonderful.  The Oca keep well, and we'll certainly be planting some of our harvest again next year. So, thanks, Robert!
#2

Tropaeolum tuberosum  (Mashua) has stopped growing, and some of the vines are senescing, but generally still leafy, tubers are showing, both my varieties flowered in Oct/Nov...I should check if the seed pods have viable seeds inside.

Oxalis tuberosa (Oca) still two varieties out in the rain that haven't gone down. One went down a couple weeks before Thanksgiving (along with the Ulloco), the others bit by bit. Yields in the range of 1-3 pounds per large pot/planter. Taste varies between varieties...sweet/starchy and bland/tangy. Lovely in a salad or stirfry.

Smallanthus sonchifolius has stopped growing, and leaves are starting to yellow and fall, the soil has bulged up across the pot. No flowers.

Ullucus tuberosus (Ulloco), I still have two pots (of 3) to harvest, got a pound plus of tubers fuchsia colors, that have faded to green/purple. Yummy sauteed, softer than potato, with a nore turnipy flavor. Remarkable harvest based on the diminutive plants.

Solanum tuberosum (Potato) from seed, moderate growth on top, moderate yield (<1 pound), despite the seed parentage, but produced round purple tubers. Quite different plants forms though. Turns out the rats love potato fruits, so no seed for me. Both with distinct potato flavor, one starchy, one less so.

Ulloco and Oca at least are strongly day length controlled for tuber growth...all my Oca stopped growing vegetatively at the fall equinox. The other probably make most of their tuber growth late in the year. Of course, my summer temperatures are like the Andes at 12,000 feet...

I find that Oca really likes free root and tuber/stolon growth...stolons ending in tubers are often more than a foot long. Maybe big grow bags would be the way to go vs. big heavy planters. Argh. the rats are digging the tubers, even with added soil in the planters...the last planter has mesh over it now!

You could browse around the sites and sellers of Andean tubers...perhaps Canna edulis would tolerate warmth better.

In any case, for those who are interested, I will have plenty of smaller tubers for sharing once they all go dormant and get lifted. Have a few more pounds of oca to clean tonight.

Last post by Steve Marak - December 04, 2022, 02:29:42 PM
Thanks for that information, Martin. I'm interested in this topic too, so I hope others will contribute their experiences. Of your list, I've only intentionally grown oca, Oxalis tuberosa. I ordered several cultivars in the spring. I had tremendous foliage growth from all of them all summer long, but in the fall, zero tubers. I knew they were a long shot with the summer heat here (NW Arkansas, US) and this year the heat lasted even longer than usual, so I was prepared for the failure. I've looked for heat tolerant cultivars but never found one.

Unintentionally, Cyperus esculentus is considered both native and introduced across most of the US, including here, and I think I killed off a stand of it in the yard when we moved here. Maybe I should try growing it intentionally. (But potted.)

Last post by janemcgary - December 04, 2022, 01:06:10 PM
Fritz Kummert's book "Pflanzen fur das Alpinenhaus" (apologies for omitting umlauts; published by Ulmer) has a very good chapter on the construction of a semi-subterranean alpine house (in Austria), with detailed drawings. It's mostly a plant encyclopedia, with plenty of geophytes discussed. The design of the alpine house is intended to facilitate warming in winter and (important for alpines) cooling in summer -- all or mostly passive. It would have to be where the water table is low enough, though, or on a slope with drains provided.
#5

In the UK there was a lot of enthusiasm for "conservatories", glass roofed extensions to houses. By now people are scrapping them - too cold in Winter, too hot in Summer. Rocks are not the only thing people who live in greenhouses have to worry about.

Seems lots of engineering around that Swedish glass house - probably for getting the heat out in Summer.

Last post by Bern - December 04, 2022, 08:52:34 AM
The ultimate solution to the energy situation in Europe is to build a greenhouse around your house.  This has been done in Sweden to good effect.  It's a very creative solution if you have the money to do it.  It's called a house in a greenhouse.  Why go underground if you don't have to? 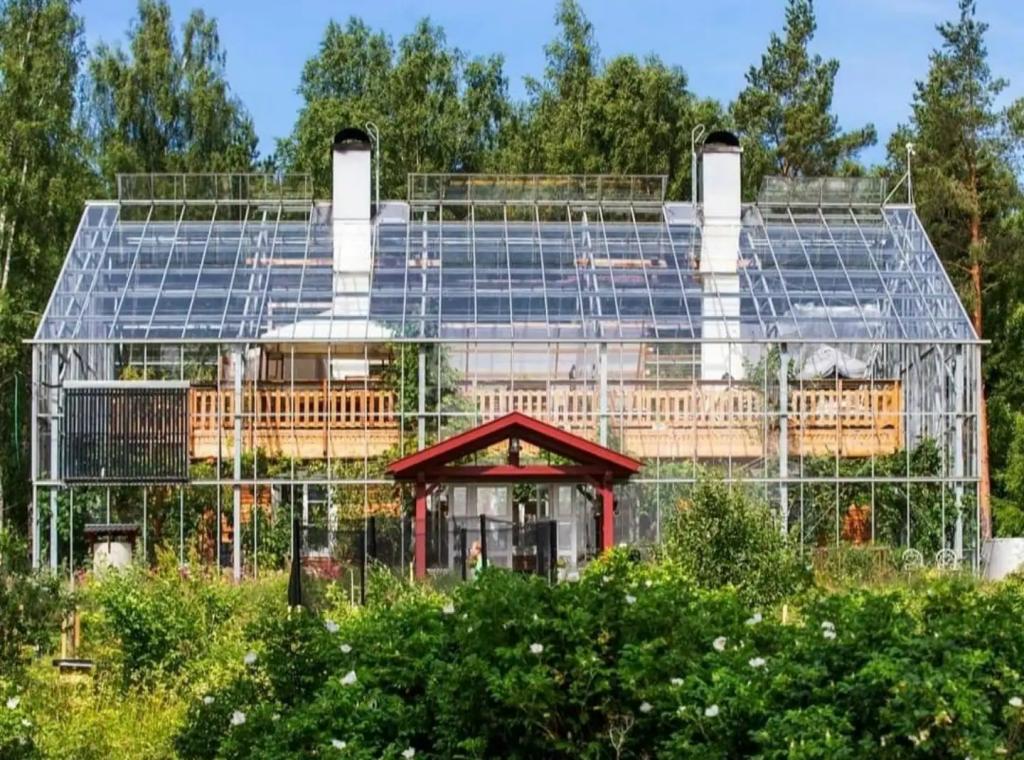 Last post by petershaw - December 04, 2022, 07:35:10 AM
The only one I have tried and eaten is Oxalis tuberose. Robert P gifted me a wonderful selection of 'cultivars' that we grew at Cabrillo horticulture for sale at the farmers market.

The yield in 1 gallon pots was really variable some producing 1-2 tubers while other over 10.

I also have one in a much larger pot that I have not harvested yet.

Taste is wonderful. Cooked in stir fry they have a really smooth texture and a slightly sweet taste.
#8

Last post by Bern - December 04, 2022, 06:24:32 AM
These semi-undergound greenhouses have been around for a long time in the upper midwestern states.  The most sophisticated ones employ geothermal heating to supplement the solar heat collection.

Here' a link to a company in Nebraska that builds these greenhouses and has been in business for over 35 years. The largest greenhouse that they construct in 2550 square feet.

If you have one you can grow citrus in the snow.

The first one to harvest was Cyperus esculentus

, which I'd attest a delicious hazelnut-like flavor eaten raw & fresh and good yield even though I only planted one pot, see wiki. Seems to be one to keep, but has the reputation of becoming invasive easily - it doesn't flower in my climate, so I'll just have to be careful about discarded potting soil...

- I like the taste of the fresh tubers, somewhere close to Tropaeolum major leaves, whereas the Tropaeolum tuberosum leaves are nowhere near as intense. Yield was diminishing though, see attached. The plants started growing when planted in may, then went nearly completely dormant for my hot summer, to return to growth in September - I harvested ahead if the first freezing end of November. They never even tried to flower, so I guess that one is not ideal for my hot summer climate.

had an acceptable yield, though I've heard it gets bigger the longer the growth phase in short day conditions is. haven't tried to cook it, but raw they are delicious, somewhat like mild rhubarb. Keeper, I'd guess. Has anyone experience with eating the parts overground?

- can't say too much about the yield, because those came potted, but it's obvious that those roots didn't originally fit in 11 cm pots. With them, too, I noticed a pause in growth during the very hot phases and a boost in September, I harvested them end of November. For now I only tried a piece of root from the white one, and found it bland tasting - watery with a hint of dahlia petals - not what I expected from something advertised as "underground fruit". They are said to sweeten in storage, so I'll wait for a final verdict, but for now I'm not impressed. No flowers, but that seems normal for my area.

All in all I guess the South American species don't tollerate my heat and are not too happy with my cold. I should search other possible origins for better fitting underground crops. Sidenote to the North American Helianthus tuberosus

: yield is massive, hardiness is good, taste is ok when raw and not my thing cooked. I removed them last year due to taking up too much space.
#10

Last post by Martin Bohnet - December 04, 2022, 01:18:41 AM
I've had 3 flowering seasons for my peruvianas outside in the garden now in southern Germany and can't report frost damage (most extreme was "just" -10.6 °C, with the number of nights per winter below -8°C countable on one hand) - of course they are NOT half-exposed here, but about 10 cm deep - until now I haven't seen a decline in flowering (the opposite, in fact), so I guess the necessity to be met is the hot summer - this year we had 3 months of average daily heights around 30°C, with peaks reaching 38°C - dormancy was very short though, the old leaves had barely dried off when the new came.
Pages1 2 3 ... 10