My interest in plants can be blamed mostly on my mother. She was always planting, dividing or moving something in the garden and although not a very active participant, I of course saw what all this work created, more often than not from behind a hose nozzle. From this viewpoint I was captivated by the amazing diversity and beauty available in the plant kingdom. After leaving home (which was in Seattle, Washington, USA) for college, I relegated gardening to an inactive interest, while I explored college, skiing, sailing and travel. And oh yes, work. However, after the initial flurry of discovering my world had passed, I found that I kept planting things when time and living situations permitted. I built a greenhouse, and friends and I conducted "plant parties" all over the area for a year of so. I also became active in several plant societies, such as the Native Plant Society, the Washington Park Arboretum Foundation, and the American Orchid Society. And I was quite active in the Audubon Society.

Many years later, having decided that ten years as a computer analyst involved in fisheries research was enough, I moved to the Olympia, Washington area to attend The Evergreen State College. Because of several trips to Central America, I had become very interested in tropical plants and ecosystems. My plan was to finish a degree in restoration ecology and ecosystem modeling.

What really happened was, I met this wonderful woman, Laura, and after a while got married. Our first child, Killian, came along shortly, and four years later, our daughter, Wren. I have been the stay-at-home parent for the last 10 years, which translates to; "I don't have enough time to get most of my projects done." However, I've had enough time to get "hooked" on plants again, and have been steadily studying and growing a wide range. And of course, if one studies plants, one has to also study geology, geography, climatograph, history, languages and so on. Also, on an occasional basis and with permission, I conduct plant salvages from sites that are to be developed. My kids especially like to help on these projects, although they do blur the boundries of the plant world, and an occasional snake, lizard or frog gets salvaged as well.

Here is a picture of me and my main assistant: 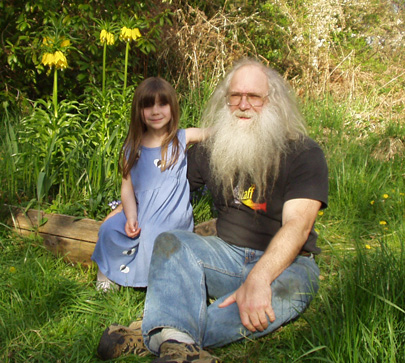