Without question, all flowers in the genus Epimedium have the same numbers of parts, but the parts that are admired differ from species to species. All the flowers have two sets of sepals, each in sets of four. The outer sepals, which protect the flower while in bud, are shed upon opening. The inner sepals are often a separate color than the petals, rarely spurred themselves. The petals, also in sets of four, have spurs which hold the nectar to entice pollinators. The petals are often diminutive, while in some species the spurs can in comparison be very long (up to 1" in E. grandiflorum) and and give the flowers a spider-like appearance, or similar to the spurred flowers of some Aquilegia. Other species, however, have reduced spurs and are grown for the colorful sepals or the leaves.

While all species of Epimedium grow from rhizomes, two types of rhizomes are found. The first is a woody knot where roots and stems emerge from nodes. The second is an underground trailing rhizome, about the size of a knitting needle, which sends out roots and stems from nodes at intervals. Propagation can be done by division in the early spring as growth is just beginning. The trailing rhizomatous types are more vigorous, and are easier propagated by division. The other types might be easier by seed.

To grow Epimedium from seed, it must be collected fresh. Seed is dropped while it is still green, so one must keep a watchful eye on the plants to collect it. The seeds possess an elaiosome, and are probably disseminated by ants. Do not let the seed dry out, and sow as soon as possible just barely scratched into the soil, or covered by a thin layer of lightweight grit to keep the seed from washing away. The seeds require a cold stratification for germ sometime in the following spring, and will often bloom within a year of germination. If many different forms are grown together, the resultant seedlings will likely be hybrids.

Photo below by Daniel J. Hinkley taken in China in 1996. It shows the rhizomes collected in the wild for use as a male aphrodesiac. Photo from his book, "The Explorer's Garden: Rare and Unusual Perennials" (ISBN-10: 0881929174), used with permission from the author. 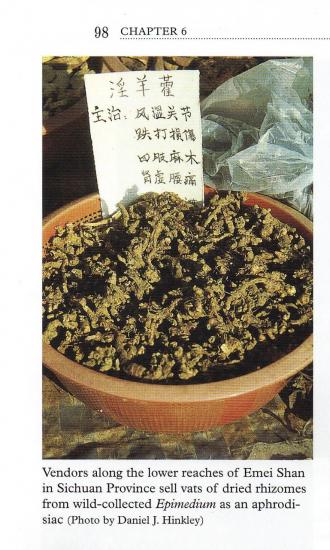 Most Epimedium's like moist dappled shade, but will adapt to dry shade or tree root competition if well established. Most, with the exception of E. grandiflorum which will not tolerate a high pH, will tolerate both alkaline and acid soils. Weather they are evergreen or semi-deciduous, it is a good practice to cut the old leaves to the ground in mid- or late winter in order to clear the view for the new emerging flowers and foliage. Some species, such as E. alpinum and related hybrids, will flower under their old leaves leaving the gardener to believe they never flower. Another good reason to do this is that the old foliage is often weather beaten or chewed by insects by the time the new leaves emerge.

Epimedium alpinum is a creeping southern European native with a wide distribution. The small almost spurless yellow flowers emerge in spring with the new leaves, which can be semi-deciduous or evergreen depending on the climate. It spreads by long thin rhizomes at a rate of about 6 to 12 inches a year. It is fairly deer resistant, and grows well in dry shade once established. First photo by Anneli Salo in May of 2009 (see copyright). Second and third photos by Travis Owen showing the rhizome.

Epimedium 'Amber Queen' is a hybrid between E. flavum and E. wushanense bred by Robin White of Blackthorn Nursery. Photo of new buds in March of 2015 by Travis Owen.

Epimedium brachyrrhizum is native to China in the Guizhou Province. It grows from short congested rhizomes. Flowers two inches across often have rose-pink petals and white sepals, or are occasionally seen in blue shades, with long spurs.

Epimedium brevicornu is a deciduous species native from the northwestern Sichuan Provence in China. Foliage is thin and delicate wuith more than 20 leaflets per leaf. Flowers are small and starry, reaching 15 inches.

Epimedium chlorandrum grows in the Sichuan Provence, China. It has narrow leaves, often with splotched reddish brown mottling. The flowers, yellow and white spurred, rise through and above the foliage on leafless stalks in spring.

Epimedium davidii was first collected by Armand David, a French missionary, in the limestone cliffs above Baoxing in China. The plants have large yellow spurred petals and short red sepals. This species is partial to alkaline conditions in the wild, and appreciates the same in the garden. It does not like to dry out.

Epimedium dolichostemon is native to the eastern Sichuan Provence, China. The flowers have white inner sepals and rose red petals. The leaves are mottled in liver tones upon emergence. It appreciates alkaline conditions.

Epimedium ecalcarata (sometimes E. ecalcaratum) is a unique species with a superficial resemblance to Kirengeshoma. Unlike other Epimedium's, the flowers are spurless, bell shaped and rich yellow on stems to 15 inches. The foliage is evergreen and changes color in winter to darker tints. It is native to the Sichuan Provence in China.

Epimedium epsteinii was discovered in 1997 by Willian T. Stearn, and named in honor of plantsman Harold Epstein of Larchmont, New York. The flowers have red-streaked white inner sepals and purple-red long-spurred petals. It grows from creeping rhizomes and has evergreen foliage.

Epimedium fangii grows in the western Sichuan Province in China. It was named to honor botanist Wen-pei Feng, who was notable for describing much of the flora of the region. E. fangii is few flowered, with large yellow petals on stems to 15 inches along with evergreen foliage.

Epimedium flavum is an evergreen species similar to E. davidii, but with larger yellow flowers (to one and a quarter inches across). It was named by William T. Stearn in 1995. It is from the western Sichuan Provence, China.

Epimedium grandiflorum is a deciduous species native to China, Japan, and North Korea. It has large flowers with long spurs in a range of colors, and has been used extensively in breeding programs. Many selected forms are available in the horticultural trade. E. grandiflorum requires acid soil, and despises alkaline conditions. It prefers moist shade or dappled sunlight in cooler climates, but will tolerate dry shade or competition from tree roots when established. It is also said to be resistant to deer. Grows in USDA zones 4 to 8. Photo by Jerzy Opioła, May 2009 (see copyright).

Epimedium grandiflorum 'Purple Pixie' is a hybrid of E. grandiflorum, though its exact parentage is unknown. Photo of emergent leaves in March of 2015 by Travis Owen.

Epimedium leptorrhizum is an evergreen species with large rose-colored spurred flowers in spring, similar to E. brachyrrhizum. This plant differs from E. brachyrrhizum by its long rhizomes, whereas E. brachyrrhizum has short congested rhizomes. Flowers to one foot tall. This species should not be allowed to dry out.

Epimedium perralderianum is native to north-eastern Algeria, where it grows in oak and cedar forests on Mount Babor, at 1,200 to 1,500 meters. It was named by French botanist Ernest Saint-Charles Cosson in honor of Henri de la Perraudière, who died on the expedition in 1861 when the species was discovered. The plant forms perennial clumps, leaflets spiny-edged in sets of three, with small yellow flowers on leafless stalks in the spring.

Epimedium pubescens is native to northwestern and central China. It is a long blooming, evergreen species. The leaves emerge mottled. The flowers are small, with white inner sepals and yellow petals on two foot stems. It has ben known to flower from late spring to mid Autumn, though this may be shortened in hot climates. Hardy to USDA zone 6.

Epimedium pubigerum is native to mountanous woodland in the Transcaucasus. Photo by Jerzy Opioła, May 2008 (see copyright status).

Epimedium x rubrum is a cross between E. alpinum and E. grandiflorum. It is a popular and common creeping hybrid grown mostly for the leaves. It is best sheared to the ground in mid winter so as not to hide the small flowers under the old growth. The flowers have reddish inner sepals, and small white petals with white spurs shorter than the sepals. It does well in dry shade once established, and should be kept away from small vulnerable plants lest they should become overcome. It is a very hardy hybrid, enduring temperatures as low as −20°C (−4°F). Photos by Peter Coxhead. See copyrights for first and second photo.

Epimedium sagittatum is an evergreen species from northwestern Hubei Provence, China. Collected and named a new species by William T. Stearn in 1992. The flowers have white inner sepals and short bronze petals. Flowers arise in early spring on an 18 inch panicle. It thrives in acidic conditions.

Epimedium wushanense is a much prized species from the northeastern Sichuan Provence in China. It has up to 100 large spurred tangerine-yellow toned petaled flowers with small white inner sepals held on panicles to four feet. The leaves extend to eight inches and emerge mottled purple.

Return to the PBS wiki Photographs and Information page
Edit | History | Recent Changes (all) | Search | Upload
Page last modified on June 28, 2015, at 06:49 AM
Powered by PmWiki