My garden is on Willapa Bay in southwest Washington on the Pacific Northwest Coast; this is in hardiness zone 8, though milder zone 9 winters are common, and every so often a zone 7 winter comes along; fifty years ago this was considered a zone 7 area. My garden elevation is 10 to 40 feet. Winters are wet and windy—the term ‘strafing rain’ applies. Summers are dry, though usually foggy, with a few days each year above 100 °F. With well-drained silty sand, ‘rock garden-like’ conditions are the best way to describe the soil.

My evolution as a gardener began with a first attraction to iris and lilies as a small child, followed by rhododendrons and native species; later I shifted to perennials, and then in an act of acquiescence I gave in to the dark side, AKA geophytes. I freely admit that I have no ability to resist bulbs, no matter how unsuitable for my garden. Winter cold and damp often kill the Central Asian and South African bulbs I find so attractive. In the pursuit of efficiency and a policy of no coddling, I no longer irrigate in the summer, except when droughts last more than 30 days, or temperatures go over 100 °F. I ran a commercial greenhouse for several years, primarily propagating annuals, so now I garden without a greenhouse, and germinate seeds either on windowsills or in the garden. My one concession to coddling is slug bait, which is critical to lily survival in a region with more than five introduced slugs and a snail. A cold frame may follow soon.

My main geophyte interests are lilies, fawn lilies, mariposa lilies, Pacifica iris, species tulips, and any bulb I can grow out of doors and naturalize in my garden. The latter has resulted in some regrets, several of which I actively weed out to this day, and many happy hours spent with the hundreds of bulbs that do grow well for me. 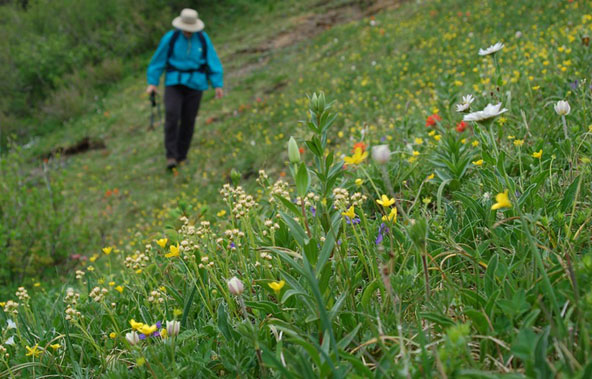 Kathleen Sayce walking in one of her favorite meadows on Saddle Mountain, NW Oregon, photo taken by Mike Patterson, June 2, 2009.

We call the peaks that surround the Columbia River Estuary the Swalalahos Floristic Province https://www.inaturalist.org/projects/swalalahos-peaks