Whether you grow species or hybrid Moraea plants, it's useful to know how to pollinate them.

The two parts of the Moraea flower that you need to find are the anthers (the things that hold the pollen) and the stigmas (the places where you put the pollen). In general, there are three anthers in every Moraea flower, and three pairs of stigmas (or stigmatic lips, as I've sometimes seen them called, because they look a bit like tiny lips or flaps). Here's a diagram of a typical Moraea flower: 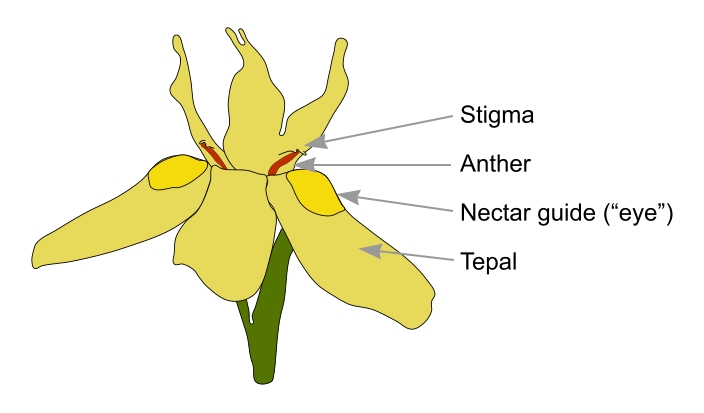 Sometimes the flaps may be stuck to the surface of the flower. If needed, you can pry them open with a very small camel's hair brush.

For a presentation, I once dissected a Moraea polystachya flower and photographed the parts. I felt like a barbarian, but it was in the name of education, OK?

The first photo shows the poor unsuspecting flower before surgery. In the second photo, I have pulled off the outer tepals (if you're an iris grower, you call these the falls).* The anther is the dark purple vertical strip in the middle. It hasn't opened yet, so you don't see any pollen on it. In the third photo, the anthers have been removed using tweezers. The fourth photo is a closeup of the stigmas.

How to transfer the pollen. I like to use a small camel's hair brush; others favor a cotton swab. Or you can just use tweezers to rip off the anther and rub it on the stigma of the target flower.

If the flowers you need to cross do not bloom at the same time, you can store pollen in the freezer. I use small plastic film canisters for storage. If you live in a humid climate, putting some dessicant in the container is probably a good idea.

In my garden, most Moraea species usually don't self-pollinate. In some species, the anther curls up and over the stigma, spreading pollen all over the place. I used to focus on removing the anthers from these flowers before the flowers could self-pollinate, but after some tests I realized that most of the species I grow are not self-fertile anyway. They need pollen from another individual to set seed, so all you have to worry about is bees and other insects (see below).

Watch out for bees. If you're serious about breeding Moraeas, you'll need to be careful about accidental pollination. It's no fun to grow seedlings for three years only to discover that they were pollinated by a bee with the wrong pollen.

In my garden in California, honeybees are attracted to the purple Moraeas (Moraea polystachya and M. villosa in particular). Moraea gigandra attracts bees, but the shape of the flower doesn't cause pollination. Moraea lurida attracts house flies and is pollinated by them. The white and orange Moraeas are generally not bothered by bees.

The bees can be very aggressive with flowers they like. In the photo sequence below, a bee is forcing open a flower of M. polystachya. In the process of fighting its way in there, it will spread pollen all over the place.

If you want to make a protected cross, you can either invest in making a screened cage, or pull off the outer tepals of the flower as it first opens (as illustrated in the dissection example above). Without the outer tepals in place, the bees have no place to land, and the flower does not get pollinated.

Usually, because I'm lazy, I do not bother to pull off the tepals. I just make sure I pollinate a flower before any bees get to it. I figure my pollen will probably dominate if it gets in there first, and I use a lot of it. A truly professional breeder would be appalled.

_________
*If you're familiar with Iris terminology, the following translation table may be helpful:

Return to the PBS wiki Photographs And Information page
Edit | History | Recent Changes (all) | Search | Upload
Page last modified on May 19, 2013, at 05:21 PM
Powered by PmWiki